One of the most iconic scenes in silent cinema was filmed on the roof of Western Costume Company. 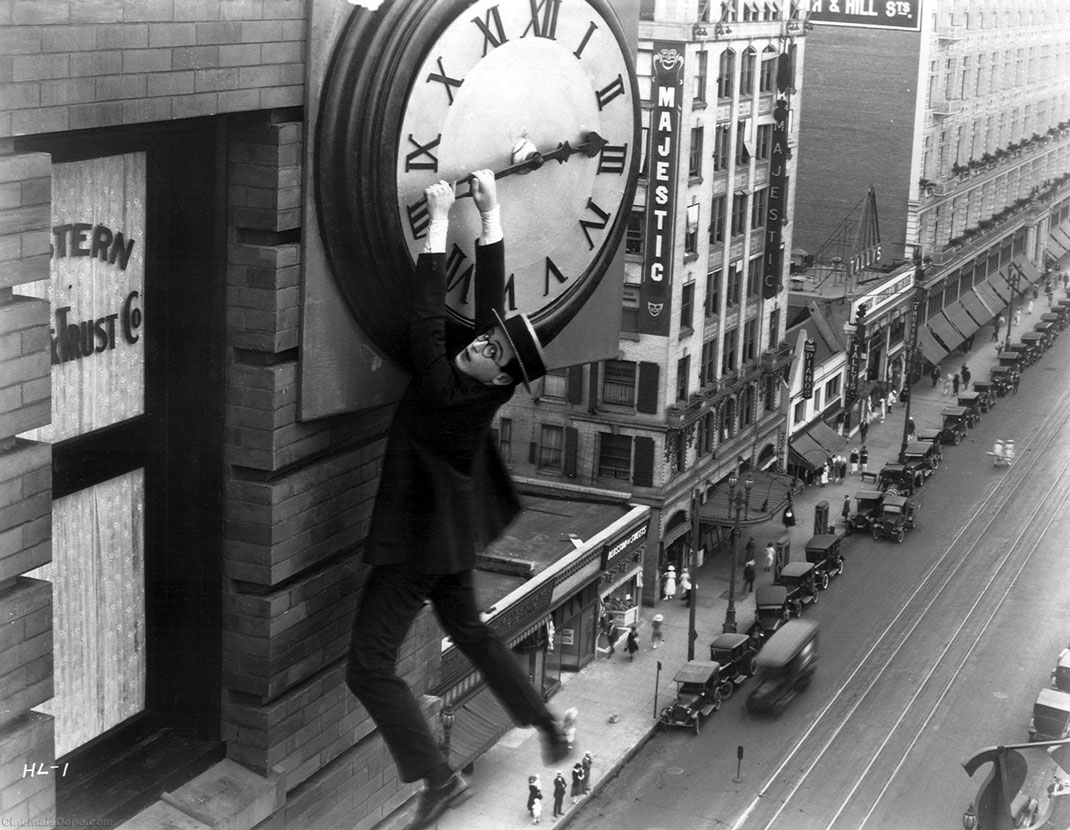 Whether you’ve seen the film or not, you know the image: Harold Lloyd, in a boater and round-framed glasses, hanging desperately from the hand of a large clock, dangling over the city below. Released in 1923, Safety Last! features a 20 minute sequence in which Lloyd scales the face of a department store. The sequence was filmed on various buildings in downtown Los Angeles, but the most iconic shot was captured on the rooftop of Western Costume Company. 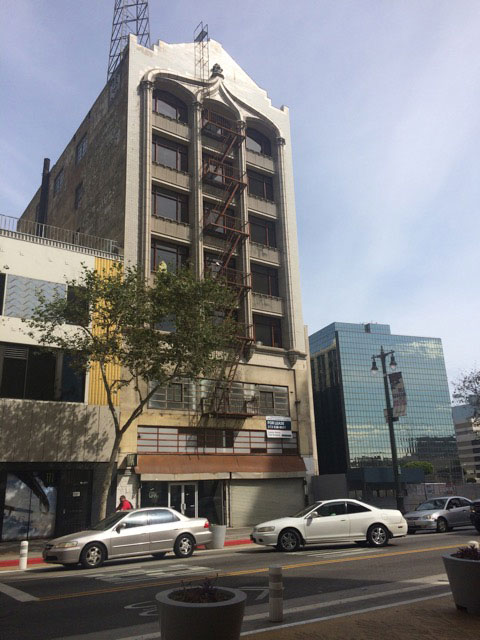 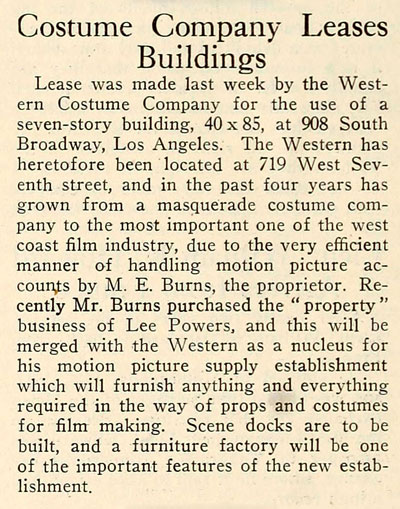 In 1919, Western Costume leased a beautiful Art Nouveau building at 908 S. Broadway (pictured at left). In 1924, the year after Safety Last! was filmed, Western acquired a much larger building across the street at 935 S. Broadway, and the 908 building came to be known as the L. L. Burns building, after the founder of Western Costume. In its early years, Western rented props and set pieces in addition to costumes, and the Burns building was used for furniture-making. Both buildings, visible in the photo below, still stand today and are listed on the National Register of Historic Places as a part of the Broadway Theater and Commercial District. The word “costume” is still faintly visible on the northern face of the 908 S. Broadway building. (And the south face now features a Banksy!) 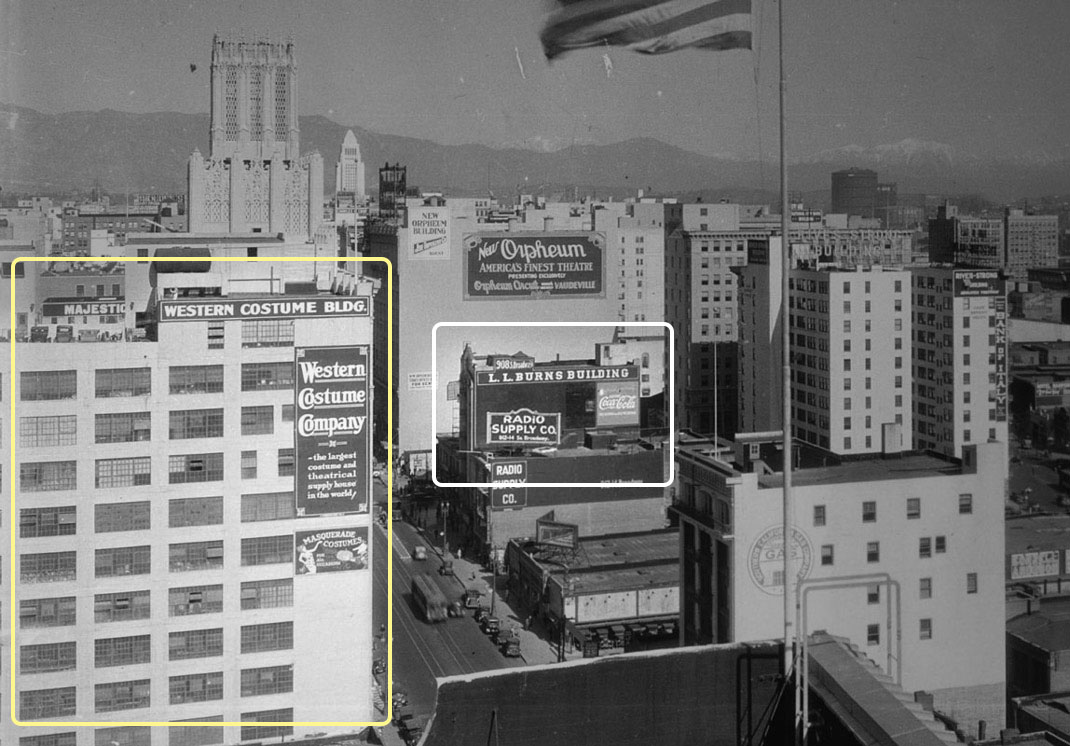 Safety Last! used the ten-floor International Savings Building, located at 226 N. Spring Street, as the exterior location of the department store. Wide shots featured a “human spider” stunt man, who actually climbed the face of the building. For tight shots on Lloyd, however, they built smaller sets that replicated the brick facade of the building, then used clever camera angles to make it appear that he was much higher than he was. “We picked out a structure we wanted for the actual building,” Lloyd explained. “Then we chose a two story, four story, or whatever height building we needed. Then we built our own sets on top of them.” The crew erected scaffolding and mounted the sets on top of three other buildings, each a different height, in order to achieve the proper perspectives. You can read more about the filmmaking process here.

At seven stories, the Burns building was several stories shorter than the International Savings Building. Because the clock is supposed to be near the top of the building, Lloyd shot the clock stunt on the roof of the Burns building. This rendering shows how the illusion was created (note the mattress!): 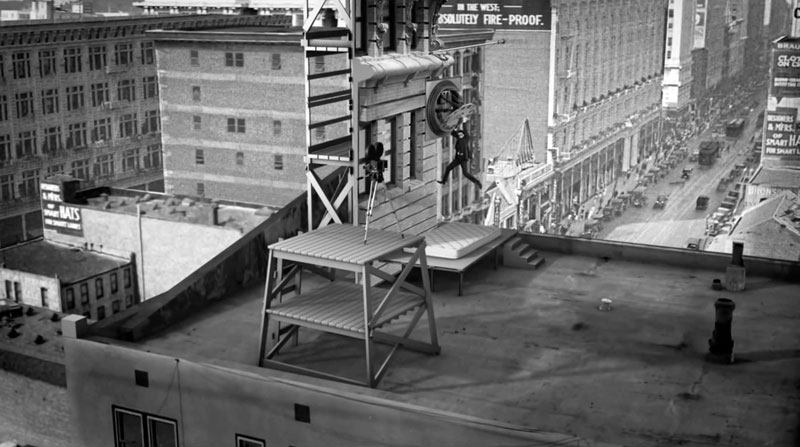 from “Location and Effects” documentary on the Criterion release of Safety Last (1923).

If you’ve never seen the film, be sure to watch the sequence on YouTube.

One last note: Lloyd lost the thumb and index finger on his right hand in 1919 when he mistakenly lit an explosive thinking it was a prop bomb. This means he accomplished all of the climbing and hanging in Safety Last! with only 3 fingers on that hand. If you look closely, you can see that the prosthetic thumb does not bend. In 2014, the prosthetic sold for $4200 during the final auction of Debbie Reynolds’s Hollywood memorabilia.